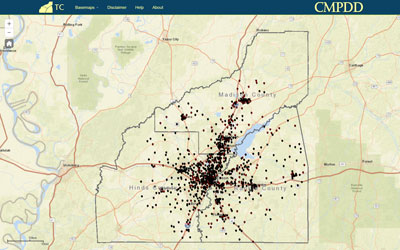 The District updates and maintains an Annual Average Daily Traffic (AADT) count database for functionally classified roadways in the Jackson Urbanized Area (JUA), which includes portions of Hinds, Madison, and Rankin Counties. This data is collected in coordination with the Mississippi Department of Transportation (MDOT), on a three (3) year rotating schedule in one of the aforementioned counties. This makes traffic count data available for each county which is no more than three (3) years old. For the interim years, that traffic count data is not collected, an estimated count for that year is developed using existing traffic count data and additional estimation factors provided to the District by the MDOT. The District disseminates this data to the public through use of its traffic count viewer.
In August, the District updated the traffic count viewer with the most up to date traffic count data available by adding data for the years 2015 and 2016. In addition, the updated data includes traffic projections for each roadway segment for the years 2030 and 2040. These projections were taken from the Jackson MPO’s Metropolitan Transportation Plan (MTP), which is used to estimate traffic conditions in the JUA over a 25 year planning horizon. The traffic projections were developed using a traffic simulation modeling software which uses various input data such as: Existing traffic volume, population, school enrollment and land use patterns, just to name a few, to estimate traffic volume for the future. The traffic count viewer can be accessed through the District’s website at gis.cmpdd.org/TC2016/. If you have any questions concerning the traffic count viewer please contact Scott Burge at (601) 981-1511 or by email at sburge@cmpdd.org.

For this and other stories, check out the October 2017 Central Update.