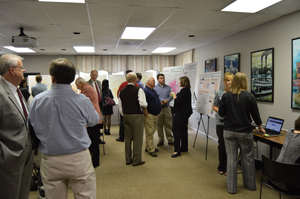 The Jackson Metropolitan Planning Organization (MPO) hosted a joint kick-off meeting with the general public and the four (4) Jackson MPO Committees (Stakeholders, Bike and Pedestrian, Intermodal Technical, and Metropolitan Planning Policy) on April 2, 2015, at CMPDD’s office.  The purpose of the “come and go” meeting was to gather valuable input from those in the metro area on how they think the transportation infrastructure in the metro-area should look in the next 25-years.   Comments provided during the April 2nd meeting will be considered and incorporated into the development of the 2040 Long Range Transportation Plan (LRTP), as appropriate, as the district moves forward with the planning process to develop the LRTP.

In addition, over the last few months District staff havecompleted developing 2040 forecasted growth for the metro area.  To develop the 2040 forecast, CMPDD used the same methodology that was used to develop previous plans, which involved modifying the Traffic Analysis Zone (TAZ) structure; gathering base year population, employment and school enrollment data; and gathering land use patterns.  Once all of the base data had been gathered, CMPDD planners were able to use the land use plans developed for each municipality and county to convert land use acreage into 2040 forecasts of population, housing, and employment based upon anticipated build out estimates for each TAZ using identified multipliers for each land use category.   Based upon build out estimates it is anticipated that the population in the metro area will increase 23%, which adds an additional 106,718 residents to the metro area by 2040.  To stay involved in the development of the 2040 LRTP for the Jackson Metropolitan area be sure to following the planning process on MindMixer,
http://mississippitransportationplan.mindmixer.com/.